Processing is another key component of Kenyon’s local food infrastructure. We source many types of food locally, not only produce. These foods often require some sort of processing before they are ready to be served in the dining hall. Processing ranges from the preservation of foods (by pickling, for example) to the slaughtering and butchering of animals.

Many of our processors are family operations that produce “value-added” products for us. We buy our pickles and applesauce from Wilma Hershberger, an Amish woman who employs neighborhood girls in the cannery in her home. During peak growing season in July and August, we buy cucumbers and beets at auction and drop them off to be pickled. They are usually ready the next day. In the autumn, we bring apples from the local orchard where we buy most of our fruit, and the women make our applesauce. Before Kenyon began purchasing applesauce, these women had no income after cucumbers and beets went out of season. 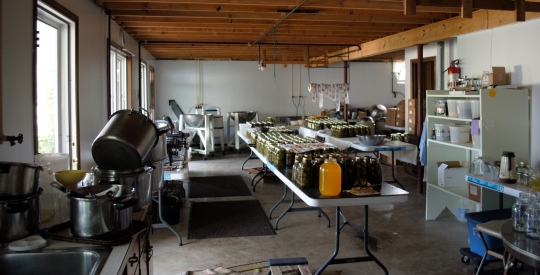 Kenyon purchases its jams and jellies from a Mennonite family that runs a larger-scale canning facility and sells to other markets. Their business is large enough that they have all of their fruits and other ingredients delivered by a distributor. We still pick up the jam at the actual cannery, but it is close enough to campus that it’s not much of an inconvenience. Working with processors like these has its advantages: the business is large enough to be stable and self-sufficient, but it is family owned so that the money stays in the local economy and our support is still valuable. 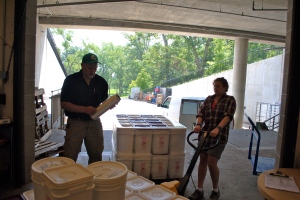 We also do some processing in the dining hall itself. In addition to the pickled cucumbers and beets that Kenyon buys in bulk during the summer, we extend the shelf life of basil by making it into pesto. Basil will wilt and go bad in about a week, but pesto lasts much longer. Likewise, when there is a surplus of tomatoes—such as at the beginning of August, near peak season, when there are very few people on campus to eat them—we can make tomato sauce out of the older tomatoes that keeps for at least two weeks.

Our meat process is more involved: it requires more steps, but also allows us to work with more local businesses. After we purchase hogs or steers from our producers, the animals are transported to the processing facility. We have two different processing tracks: we send hogs to Dee-Jays, a smaller facility that is fifteen miles from campus and has slaughtering and butchering capabilities in the same facility. We send our steers first to Boliantz Packing Company, a slaughterhouse about forty-five miles north of campus, and then to Bergman’s Meats, a butcher forty-five miles south of campus.

Dee-Jays is a very convenient processor because it is able to slaughter and butcher the hogs in the same place, thereby reducing processing time and extra transportation costs. Furthermore, we liked the flavor profile of Dee-Jay’s processed meat over Bergman’s. Yet Bergman still does our hogs every third rotation, because the students really seem to enjoy his deli ham and smoked meats—Bergman’s hams and bacon are processed in an old fashioned smoke house.

When Raber’s hogs are ready to be slaughtered, they are transported to Dee-Jays, where they are slaughtered, butchered, packed and frozen so that they can be transported back to campus and frozen. We recently began freezing the cuts of meat in the yellow bins that we also use for local produce, providing a more uniform system for the chefs to identify certain items as local. This way they can know at a glance, which items are local and which are not, and they are better able to communicate this information to students.

When the Conards’ steers are finished, they are transported to Boliantz’ facility, where they are usually kept overnight and slaughtered the next morning. We typically order eight steers per month from the Conards; Marsh and the chefs have learned over time that eight steers yield approximately the right amount of meat. At Boliantz, the steers are slaughtered, skinned and cut into sides of beef, graded by a federal inspector, and then frozen. The Conards’ steers are consistently graded high, making our local meat worth the extra cost. If we tried to purchase meat of comparable quality from Sysco, it would be far more expensive than what we currently pay. The frozen sides of beef are then transported in a refrigerated truck to Bergman’s facility, where they are butchered into particular cuts.

Kenyon recently began purchasing chicken locally as well. This process is more complicated than for beef and pork because there are fewer processors in our area, and simply because each individual animal is smaller. We work with Pleasant Valley Poultry in Baltic, a facility run by an Amish family fifty miles away: it is the nearest facility that is both state-inspected and able to process the number of birds we need. We first began to work with Pleasant Valley when we purchased 4-H chickens from the Knox County Fair in 2011, but for the sake of simplicity we now purchase chickens directly through Pleasant Valley’s supplier.

There are several issues to consider when working with local meat processors. Often the greatest challenge is a lack of processors in the area, though we are fortunate to have processors within a reasonable distance from the college. Another problem is that of inspection. Institutional and corporate guidelines require that all meat processing facilities from which their accounts purchase be fully inspected. Ohio has state inspectors, but in some states there is no state inspection board. Some dining services may require federal inspection, which can be even more limiting. Kenyon and AVI require that all meat be processed in a state-inspected facility. We take our chickens to Pleasant Valley, in part, because the chicken processors that are nearer to campus are not fully inspected. Likewise, we work with Boliantz because his facility has a federal grader as well as a federal inspector, assuring Kenyon and AVI of both the quality of the meat and the proper processing methods, and assuring that the farmer can get fair compensation for the product.

There are also challenges inherent in working with whole animals rather than ordering particular cuts. Because we purchase the whole animal, we must make use of as many of its parts as possible, requiring flexibility and creativity on the part of our chefs. The chickens we buy from Pleasant Valley are usually cooked on the rotisserie, because it is far more expensive and wasteful to purchase only chicken breasts from the local processor. When working with beef, our chefs use chuck roasts and round roasts most heavily because these are some of the largest cuts of meat and are easiest to use. However, because we purchase whole steers, we must find ways to use as much of the animal as we can. We are generally able to use up finer cuts, such as tenderloin and steaks, for catering events and other special occasions. Colleges that are less isolated might be able to form a relationship with a local restaurant that can use these more expensive cuts.